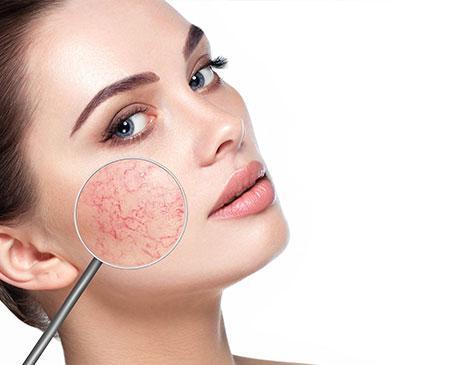 There are many causes of redness in the skin. Some of them are caused by environmental factors, reactions to stimulus, genetics, and age. Rosacea, PIH, telangiectasia, cherry angioma, Poikiloderma of Civatte, and purpura are some examples of redness of the skin, and each of these can be taken away with the lasers we have at Gentle Revive, in Lindon Utah.

When a person has rosacea, the cheeks and nose appear blushed or flushed and might have broken capillaries visible. With time, it is common to have tiny bumps in the area as well. In less common cases, the redness also affects the chin and forehead. Generally speaking, rosacea looks like a sunburn that refuses to heal. Over time, more broken blood vessels appear and the skin develops a ruddier, more persistent flush. It is also common for the nose to start looking lumpy and enlarged from swollen tissue. An emotional or physical trigger (for example, sun, heat, stress, hot baths, spicy foods, or alcohol) will increase blood flow to the skin, dilating blood vessels and causing flare ups making your skin flushed and red. The origin of the problem is that the blood vessels stay dilated, so over time they stretch and suffer damage. Our laser treatment will get rid of the redness and leave you will beautiful, clear skin.

Post-inflammatory hyperpigmentation, or PIH, is the medical term used to describe discoloration of the skin that follows an inflammatory wound. It is the skin's natural response to inflammation. It usually looks like a flat area of discoloration on the skin. These flat, discolored areas are also called macules. It can range in color from pink to red, purple, brown, or black, depending on your skin tone and depth of the discoloration. PIH develops when a wound or irritation, like a scrape, rash, or pimple, causes the skin to become inflamed. As the skin heals, it produces too much melanin. Melanin is the protein in the skin that gives the skin its color. It's the excess melanin that darkens and discolors the skin. This discoloration remains even after the wound has completely healed. It can develop in all skin types, but it tends to be more severe and longer lasting for people with medium to dark complexions, and affects both men and women equally.

Telangiectasica (commonly called spider veins) is a condition in which tiny blood vessels on the face caused threadlike red lines. They form gradually and often in clusters. Telangiectases are common on the lips, cheeks, around the nose, and on the fingers. They can cause discomfort, and many people choose to have them removed. Removal is done by causing damage to the vessel and forcing it to collapse. The body then absorbs the cells and the redness is gone. We have two ways to treat telangiectasia at Gentle Revive, and we'll determine which one is most efficient for you when we visit together for a consult.

A cherry angioma is a small, red, benign spot on the skin that happens because of an overgrowth of small blood vessels. They can be flat, slightly raised, and can be located anywhere on the body. The cause of most types of angiomas is not known, but it is believed that genetics may play a role. Often, cherry angiomas increase in number with aging and do not have any known negative effect. They are easy to remove with our laser technology, and we would love to give you back your clear, youthful skin.

Poikiloderma of Civatte, also known as sun-aging, is a common skin condition that mainly affects the skin on the sides of the neck. The affected skin is red-brown, and it characteristically spares the shaded area under the chin. The term "poikiloderma" refers to a change in the skin where there is thinning, increased pigmentation and dilation of the fine blood vessels. The exact cause of poikiloderma is unknown. Fair skin, high amounts of sun exposure, hormones, and photosensitizing components in perfumes, cosmetics and toiletries seem to be contributing factors.

Purpura, also called blood spots or skin hemorrhages, refers to purple colored spot on the skin. Purpura is caused when small blood vessels burst, causing blood to pool under the skin. This can create spots on the skin that range in size from small dots to large patches. It can look like a tiny cluster of bruises, and they do not blanch when pressed. Our lasers will take care of them for you.

Whatever the redness on your skin is caused by, we have a laser that will make it go away. To schedule a consult, make an appointment by phone or online today. Today you are one day closer to clear, glowing, and healthy skin.